Wednesday: Today I set off up North for my big drive to Alice Springs. After filling up the car with petrol, buying some snacks and plugging in some tunes, I was well on my way!

The day was uneventful, but that’s exactly what you want when you’re driving alone across Australia!

I did have an interesting experience with a lady in a service station though… I had decided to buy a jerry can to fill up and keep in the boot, just in case I needed it in an emergency. The first can I picked up had no lid, so I checked the others and sure enough they didn’t either.

When I mentioned this to the lady at the till, she didn’t seem to get what my issue was – her response was along the lines of ‘what’s on the shelf is all we’ve got’. Sigh. “Okay, but I can’t put petrol in something that doesn’t seal,” I countered.

After some backwards and forwards and a bit of sign language, she disappeared into the back room and came back a full ten minutes later with a lid for the Jerry can. I presume they keep the lids out the back to stop people from stealing the cans, and this is fair enough. Just a shame the whole thing took so long!

I covered 550km and ended up in a town called Karratha for the night, where I stayed in a very quirky little Backpackers hostel. My supplies were waning and I was feeling tired so I decided to treat myself to a bought dinner out rather than cobbling together my own. It was only when I got into town and seated myself in a restaurant that I realised it was Valentine’s Day…

But! I stood my ground, sat on my own, and enjoyed my Valentine’s date with myself…because I could!

Thursday: Word of the day – rain. It’s wet season up north so this wasn’t unexpected. I left Karratha around 8:30am and managed about 600km without a hitch. Then I had another interesting petrol station experience – anyone noticing a pattern here?

I stopped at a roadhouse with about a quarter of a tank left, only to discover they were only taking cash…of which I had none. The next service was another 230km away, and even with the contents of the Jerry Can I wasn’t going to make it. Thankfully the cashier finally agreed to let me owe the money – she took my card details and name and said they’d charge the card once their system was back up. The fuel here was also horrendously expensive so I only filled up enough to tide me over and then made a point of driving more economically (aka slower) to the next service.

But alas, I didn’t get that far before another interruption! The rain had already hit by this point and about a kilometre after the roadhouse, I encountered my first bit of flooded road. No matter, it was merely a couple of centimetres and nothing to write home about. There were a few more of these before I eventually found myself facing one which did look a bit more dodgy. I’m pretty sure I could’ve got through it, but since there was a guy and his daughter with a tow truck, literally waiting to give me a ride over (yes, really), I didn’t bother taking the risk. Saved me some fuel too!

I eventually got to Broome around 7pm, having covered 850km, and checked into the YHA. A shower, a cold beer, and some time spent watching the incredible electrical storm unfolding were the next things on my agenda, and since I have achieved all of these, I am satisfied.

There’s a chance that if these rains get worse overnight then I may be stuck in Broome tomorrow if the roads are closed. I can probably spare a day though, it’ll just mean the other two are much more km-heavy. We’ll have to wait and see! 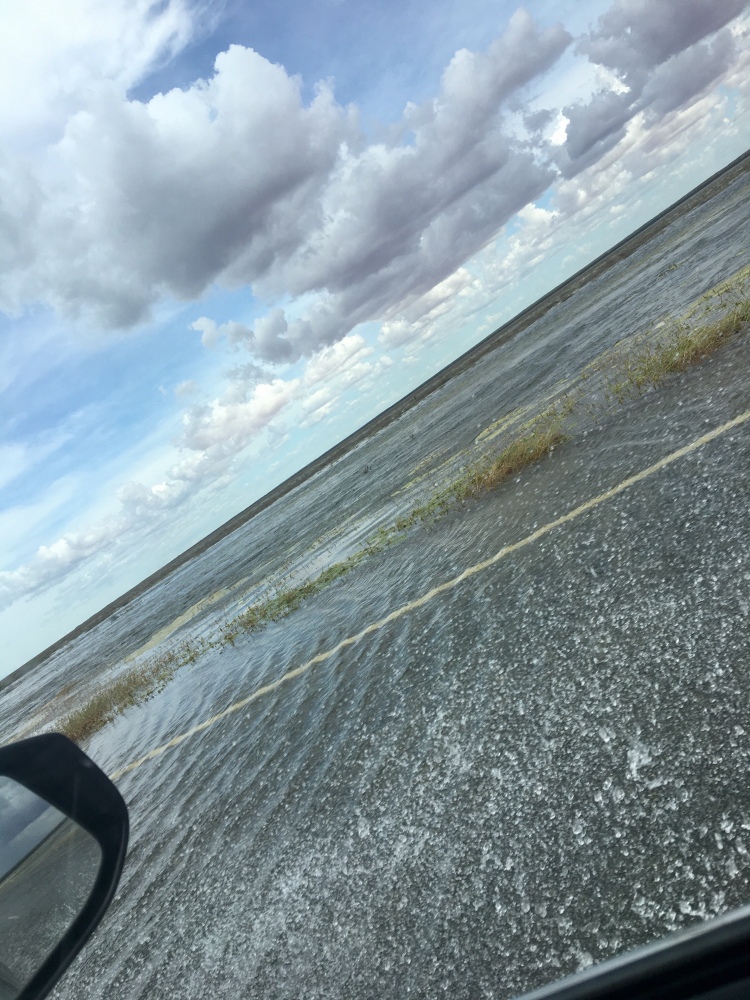