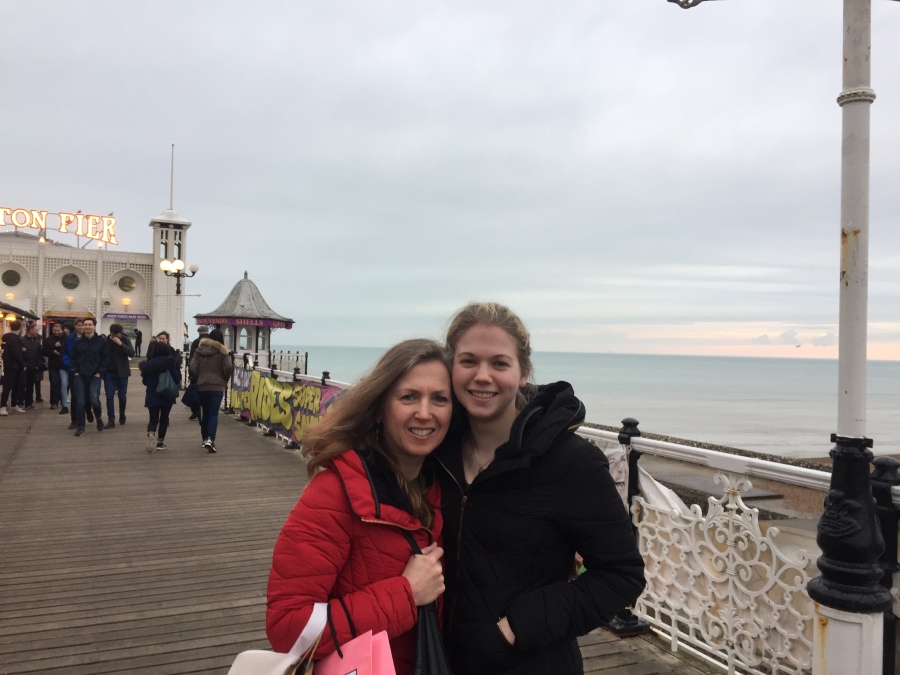 This is going to be a Brighton appreciation post.

As most people who know me personally will know, I moved to Brighton (UK) in September 2018 to start my degree in Pharmacy at the University of Brighton. As soon as I discovered that Brighton Uni offered the course I wanted to study (MPharm with Integrated Foundation Year), I knew it would be my first choice uni.

My Mum was born in Brighton and although she later lived in Essex before flying the nest, both my Grandparents ended up moving back here which means I’ve been to Brighton a few times a year ever since I was a child. I’ve heard people say that it’s like London but friendlier. I can’t get on board with that description because I don’t see any resemblance to London in it at all. That may be because Brighton holds a lot of unique childhood memories for me though. One of which is going down to the pier and getting fresh, hot donuts (there’s that prompt!) with my Mum and whoever else we happened to be with on the day. Wandering through The Lanes and along the seafront are classic Brighton things for anyone but for me there was my Mum’s favourite restaurant, Terre A Terre, family dinners in the fish and chip restaurant at the Marina (which unfortunately no longer exists) and getting to push my Nan’s wheelchair when I was a bit older which I loved because it made me feel helpful and grown up.

The house I’ve ended up living in this year happens to be across the road from the cemetery where my Nan and my Great Aunty’s souls are resting. I’ve been thinking about my Nanny a lot recently; she passed away in 2010 and although I was relatively young at the time, I still have vivid memories of some of the time she spent in the Hospice. She would have been 80 this July. She was a wonderful, selfless woman who had been dealt a pretty tough hand in life but who never in my lifetime complained or felt sorry for herself. I think her grandchildren were the light of her life. She’s been gone for almost half of my life but I still love being in Brighton and feeling close to her, knowing she’d be so proud of what I’m doing and so happy to have me nearby if she was still alive.

This post is intended to be thoughtful rather than maudlin. I know it seems a little sad but as soon as the prompt word ‘donut’ came up, it made me think of hot donuts on Brighton Pier and all the memories associated with that.

Oddly enough, I don’t find myself on the pier all that often (something I need to rectify!), but when I do, I always make sure to get a hot donut for old time’s sake. It’s important to live in the present and to look forward to the future, but sometimes remembering the past, in the people in it, can be a joyful and uplifting experience.

This is a little bit of a cheat post in terms of May, Myself and I but I’m still shoe-horning the prompt word in there and you can’t fault me for trying!

It’s my post for May 2nd, the second day of May, Myself and I, but I’m actually writing it late in the evening of Friday 3rd May. I’ve had an unexpectedly busy couple of days involving mechanics, hospitals and lots of driving. I won’t go into detail about the hospital part other than to say that one of my relatives was rushed to hospital on Thursday evening but I saw him today and for the most part he’s okay.

As for the mechanics, oh boy do I have a story to tell. I’ve just realised this actually feels a little like deja vu, as it was a little over a year ago that I was writing on this blog about car troubles I had back in Australia.

A little while ago, my beloved Mazda 2 called Bex started making some funny noises when I put my foot on the brake pedal. If I was sensible and a bit more with it, I’d have phoned the garage as soon as it started but as it happened, I carried on tootling around, doing my thing and ignoring the noise. A few days ago, I noticed it had gotten worse. I phoned up the local dealer (not a branch I’ve used before, as I’ve not had any issues with it since I’ve lived in Brighton), who said they could book me in to have it looked at on the 10th May.

“The tenth?” I questioned. “I was really hoping you could see it before then because it’s the brakes and they’re obviously quite important..” I was told that the 10th was the earliest they could see it, but being the trusting person I am, I figured that if they were happy to make me wait that long knowing the problem, maybe it wasn’t as concerning as I had thought.

Fast forward to Thursday when I phoned up the dealer in Salisbury, knowing that I was coming home that night for an impromptu visit. I explained the situation to them and asked whether they could squeeze me in whilst I was home. At this point I was told not to drive the car (and certainly not to drive it 90 miles down the motorway) and to call roadside assistance for someone to have a look at it. The upshot ended up being that my brakes were knackered, the fact that I’d been driving with them like that was “very dangerous” (quote; the mechanic, 2k19) and it needed to be sorted ASAP.

Somewhat ironically, it ended up going to the same garage that I had initially phoned and they saw it and repaired it the very same day! 24 hours and £370 later, I have a new set of brake pads and discs and a much safer car.

What does this all have to do with stars, you ask? Well, in hindsight I realise how lucky I was that nothing went wrong with the brakes whilst I was driving. The whole situation was a faff and a pain in the arse but I’m thanking my lucky stars that it cost me money and not my life. Moral of the story guys; contact a garage as soon as something dodgy starts going on with your car, especially if it’s to do with the brakes. And if they fob you off for a booking in two weeks time, call someone else! Don’t take risks!