So far you know that I overslept, watched the sunrise, walked around the base of Uluru and spent some time in the Cultural Centre – all  before 10am!

On our return to the hotel, I took a nice long nap, and followed this with a swim before getting dressed up to head back to Uluru for a Champagne Sunset, organised by Tom, our lovely trip manager, and Dave, our driver.

Don’t ask which I preferred between the sunrise and the sunset ’cause I honestly couldn’t decide. Tom and Dave kept the champagne flowing and provided us with chips and dips and various other nibbles – the whole evening was just lovely. As it was the last night we’d all be together, we said our thank yous to Tom and Dave, and everyone posed for photos with everyone else in front of Uluru! Even in the four short days that I’d been with these people, I’d had such a wonderful time, made some lovely friends and shared such a unique experience with them. I said this in the caption of one of the photos I posted on Instagram and it’s true: I will never forget those moments or the people I shared them with.

The sun went down and I left feeling happy and calm and positive. It’s amazing how a beautiful place like that can make you feel.

The evening’s fun only continued when we got back to the hotel, as there was live music in the outdoor bar, which we stayed up listening and subsequently dancing to into the night.

I’m so grateful to have been on that tour; Uluru itself wouldn’t have been any less amazing if I was on my own, but the people I shared it with just made it!

Thank you to my very first Contiki Family, I’m sure that won’t be my last Contiki tour. 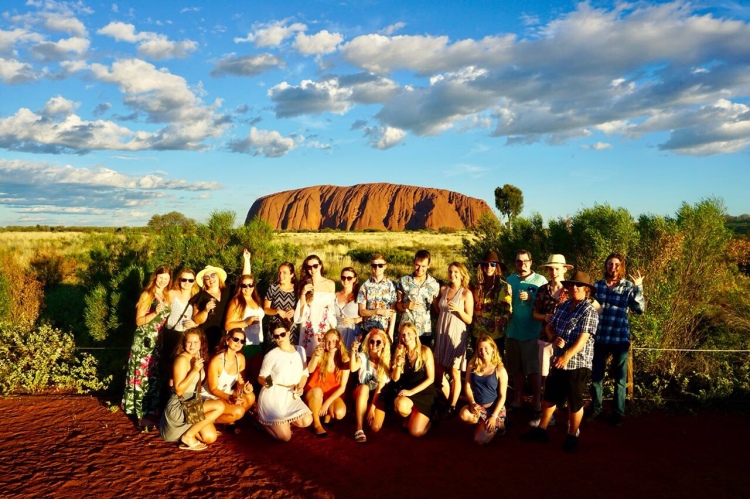 So, when I left off, I was on the coach on the way to Yulara. Yulara is the only town in the vicinity of Uluru/Ayers Rock. Previously, there was nothing there in the way of civilisation, but due to people illegally camping close to the rock, disrupting the wildlife, disrespecting this sacred Aboriginal site, and causing danger to themselves.

Heard of the ‘dingo ate my baby’ story? No, neither had I until I got to this country – but it turns out it was quite famous, and a completely true story. In August 1980, a family were camping at Uluru when a dingo snuck into the tent, took and killed their two month old baby. The body was never found. Situations like this one led the Northern Territory government to build the town of Yulara so that people had a safe and regulated selection of places to stay. It was owned by the government at first and then later privatised, and the whole town, save for the bank and the post office in owed by the same company!

We arrived in Yulara and checked into The Outback Pioneer resort, with three or four of us to a dorm room. The first thing any of us wanted to do was go for a swim, but just our luck, the pool was closed for 24 hours for cleaning. After we spent half an hour whinging about the lack of pool, I suddenly realised: the whole town is owned by the same people. Surely, this meant we could just go into one of the other hotels and use their pool! I was right. Naturally, myself and a couple of others chose the most expensive hotel to go and crash, and preceded to spend the afternoon here. Five stars an’ all!

It was another early start on Thursday to go and see the sunrise at Uluru. Though not as early for me, given that I didn’t wake up until about 6 minutes before the coach left, and even then only woke up because one of the others phoned me to find out where I’d got to. (Thanks Cam!) I was a little miffed that my room mates hadn’t woken me up, but when I spoke to them later, it turns out they had tried…multiple times! They turned on the lights, told me it was time to get up, told me we were leaving soon… at one point I even responded, but alas was dead to the world, until 05:24. I got out of bed and threw some clothes on simultaneously, and hotfooted it to the coach, where I collapsed into a seat and practically fell back to sleep for the half hour ride to Uluru!

And then, finally, the main event! Everyone knows how big and beautiful and impressive Uluru is, but you never quite appreciate it until you’re there. I have no words to describe it, but I did take plenty of pictures.

After the sun rose, we walked around the base, taking in the sheer size and beauty of this giant red rock. There were some parts which are considered sacred sites by the aboriginals and therefore you’re not allowed to take photos of them. The parts that I could take photos though, I mostly did, except for those moments when I just stood there and soaked it all in. It really was bloody beautiful.

By the time we’d done this, I was starving, having missed breakfast, so I grabbed a ham’n’cheese toastie in the café a few kms away (bizarre thing to eat in 40 degree weather, let me tell you!) and then had a wander around the Cultural Centre; a museum of sorts which has lots of information on the meaning of Uluru to the indigenous people and some of their traditions and customs. I’ll write about what I learned there in a separate post, as there was so much interesting stuff that this one might turn into a novel!

Next up: the Champagne Sunset…

First off – apologies, it has been a little while since I updated. What follows will be updates on the last week or so!

Having made it to Alice Springs (I was able to get a bus straight there from Katherine, without having to go to Darwin first) and joined my Contiki tour a day late rather than having to cancel it, I then had a wonderful four days in the Outback!

On Tuesday we went to Kings Creek, where we camped for the night.

The intention was to sleep in ‘swags’; one-person, tent type contraptions. The night started out with mine open, quite literally sleeping under the stars. When it started to drizzle I closed it up and nodded off to sleep. Next thing I knew, the others were waking me up, cause it was pouring torrentially and a full on thunderstorm had hit. We were moving inside!

I must say, I was a little irked because I was actually warm and dry inside my swag and getting out of it meant I was then exposed to the rain and pretty soon was drenched. We all had to frantically gather our belongings, chuck the swags in the trailer and then traipse to the other side of the campsite where we took shelter in reinforced-tent-cabin-rooms (I honestly don’t know what else to call them!).

Thinking this was the end of the night’s drama, I dried off and went back to sleep. Only for the smoke alarm to go off two hours later..!

Don’t get me wrong, low battery warnings are great, and they do save lives, but they’re not fun in the middle of the night. I got up and took the battery out, and it took all my self control not to open the door and toss the thing into the rain!

Come 5am, it was time to actually get up for real. The early start was so that we could do the hike around the rim of King’s Canyon before the sun got too strong and the temperature too hot.

This was a pretty easy hike, save for the very first leg, known appropriately as ‘heartbreak hill’! This was the steep uphill that was necessary to actually get to the rim of the Canyon. Once we were up there though, it was worth it for the beautiful views and the early morning walk. And though this makes me hated by the majority, that is exactly the kind of thing I enjoy!

After the walk, we headed back to the campsite for a cooked breakfast and then set off on the coach for the town of Yulara.